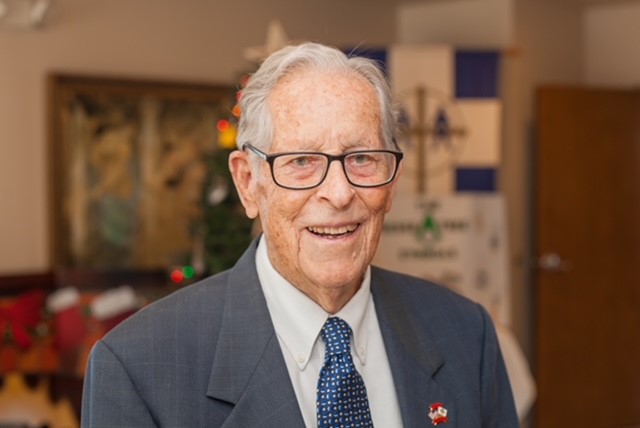 William Oliver Infinger, a loving, gracious and Christ-centered man, passed peacefully on June 12, 2022 after a long and well-lived life of 102 years. He was born in Harleyville, SC on January 10, 1920 to the late William Marvin Infinger and Lydia Viola (Canady) Infinger. As a part of “the Greatest Generation,” Oliver served in the US Army during World War II, receiving the Purple Heart after becoming wounded in the Normandy D-Day Invasion. He also received France’s highest honor, the French Legion of Honor, for his service.

While attending Asbury United Methodist Church in Charleston, SC, he met and married Jackie in 1949. Oliver spent his career in construction as the foreman at his uncle’s business, Canady Construction Co. (Stier, Kent and Canady). He retired in the mid-80’s, and never one to relax or sit still, spent much of his retirement building family homes and working with organizations like Habitat for Humanity to help others in the community. Oliver was always ready to offer a helping hand, and a hammer, and loved sharing his expert carpentry skills when they were needed, great or small.

Oliver was a good and faithful servant to the Lord. He was an active member of Asbury United Methodist Church, and then at Grace United Methodist Church where he served as a deacon, served on the finance committee, and was in the Men’s Club. He loved singing in the church and often could be heard whistling hymns while he worked.

He loved spending time outdoors, especially fishing and camping with his family. He never met an oyster he didn’t want to eat. Nothing gave him more pleasure that having a big family oyster roast. He pursued a lifelong hobby of hunting wild turkey and deer into his late 90s.

In lieu of flowers, memorial donations may be made to Epworth’s Children Home (epworth.org); Amor Healing Kitchen (amorhealingkitchen.org); Roper Hospice Cottage/Roper St. Francis Foundation; or to Bugles Across America (buglesacrossamerica.org).

To order memorial trees or send flowers to the family in memory of William Oliver Infinger, please visit our flower store.
Send a Sympathy Card