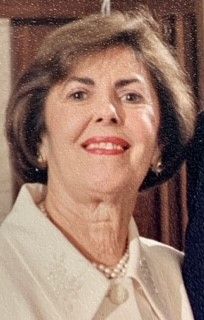 Terry was born May 26, 1926 in Brooklyn, NY and raised in Bridgeport, Connecticut. She came from a long line of quiet but strong women. Terry was the first of her family to go to college, becoming a physical therapist in 1947. She moved away to marry Henry Berlin of Charleston, SC in March, 1955.

Terry was the perfect foil to boisterous Henry. Raising their four children with only a small paperback from Dr. Benjamin Spock. She was filled with common sense and never missed a beat, saying "Well, you can do what you want," then pausing to give her opinion. Terry was effortlessly beautiful, even into her 90's. She was very "farm-to-table" before it was popular, often dragging her children to pick fruit and vegetables on neighboring farms. She believed in less medicine and more fresh air and exercise.

Terry was known for her baking, often taking hours to get perfectly symmetrical strawberries. She loved her family and her friends. She will be missed by all who knew her.

She was preceded in death by her son, Brian David Berlin; her husband, Henry Berlin; her parents Kuna and Sadie Brown; sister, Goldie Kraut and brothers, Benjamin Brown and Morris Brown.

The family would like to extend their sincere gratitude to Sandra Dasburg for the care and kindness she gave to Terry. The family would also like to thank caregivers, Sandra Crittenton and Lucille Beaufort.

In lieu of flowers, memorials may be made to BSBI Synagogue, 182 Rutledge Ave. Charleston, SC, 29403 or The American Cancer Society.
To order memorial trees or send flowers to the family in memory of Terry Brown Berlin, please visit our flower store.