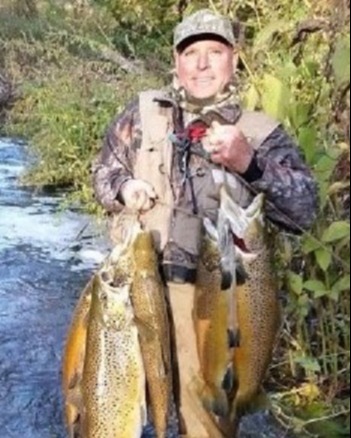 Richard Edward Stefani, age 63, President and Owner of A-American Plumbing, was born in Plattsburg, NY on February 1, 1959 and passed away doing what he loved on Friday, December 30, 2022.
Richard, the oldest of four and first child of Mr. Joseph S. Stefani and Shirley Alsheimer, was a beautiful curly-headed boy with ambitions as big as his green eyes. There was always something of his father apparent in his expression; perhaps the way he carried himself and eventually, the lack of hair.
Growing up in Otranto of North Charleston, Richard had access to creeks, boats, the woods and all the opportunities for mischief that a bright and hyperactive boy needed. He, along with his life-long best friend, the late Sandy Stuhr, developed an early love of the outdoors through fishing, hunting and spending time on the water. As a teen, Richard, challenged authority at school and at home, choosing to spend his days in flip flops and Levi’s or Birdwell’s while exploring the Lowcountry. His split afro and huge smile defined his character but following the rules was never his style. He lived by his own rules and had a few brushes “The Law” before losing his disdain for authority, but his energy, drive, and love for life never did.
Richard and his children enjoyed great friendships and camaraderie in the Foxborough community where they lived through the children’s teen years. Richard loved the Lowcountry, and anywhere he could spend time with his children, and passionately believed in working hard and playing even harder.
Some of his greatest pleasures came from sharing his love and expertise of fishing and hunting with his children because their successes made him happy. If you knew Richard, you knew he would do anything for his children and he ensured that they could handle themselves in any challenge that came their way. Despite what some may have seen as a rough exterior, Richard had the rare ability to truly make everyone feel like they belonged, no matter who or what was going on. His caring heart and genuine soul helped Richard appreciate and fulfill dreams no one could ever dream of; he was a true celebrity. He loved taking care of others in every aspect of his life, it was simply who he was; but he also loved when others catered to him. Everything Richard did was full throttle; he simply couldn’t do it any other way and lived more in his 63 years than most people do in a full lifetime and he let everyone know it too, always making his presence known. He was a rare, generous and “real” human being who operated in extremes in the most beautiful and entertaining way.
He was an accomplished fisherman, in-shore and off-shore, and loved his many Octobers in NY where he found great joy fly-fishing for salmon with his many friends. He was an incredibly accurate shot whether hunting quail, deer, dove and turkey and in the woods he found peace and solace, no matter where he was. Traveling the world (and getting paid for it) was Richard’s dream and to support that recently became a licensed and certified Boat Captain. If Captain Richard could physically do something, he was there, ready for the next experience. Richard was passionate about the outdoors and found joy in making memories with beginners, not only their first memories but their best.
When Richard was 31, the legacy of A-American Plumbing began and over the course of 30 + years Richard provided leadership in many capacities at his business and was loved and respected by his employees for his professional knowledge, spirit, true heart, humility, and humor. He wanted the families served by A-American Plumbing to be cared for in the best way possible; if not so - he was a force to be reckoned with.
For so many of us, the loss of his earthly presence will leave an unfillable void, but the essence of who he was and how his warm-heartedness made us feel, will never leave us. He was a loving son, brother, nephew, uncle and especially a dedicated father to Cody, Chelsea (Birdie), and Alexander; if he was in your life you were blessed by his mischievous smile, loyalty, and big heart.
Richard is survived by: his sons Cody Richard Stefani and Alexander Gordan Stefani of Goose Creek, SC, his daughter, Chelsea (Birdie) and Darian Braddy of St. Thomas, VI, and his father, Joseph S. and Glenda Stefani.
Richard also leaves behind his sisters, Susan Milos of Hanahan, SC, Lee Ann Stefani, and Karen Hallford (Currie) of Austin, TX.
He was preceded in death by his loving and patient mother, Shirley A. Leopard.
A memorial service celebrating Richard’s Life will be held at 10:00 AM Saturday, January 14, 2023, at J. Henry Stuhr Inc., Northwoods Chapel, 2180 Greenridge Rd. in North Charleston. The family will receive friends immediately following the service from 11:00 - 1:00 pm and will adjourn to his residence in Summerville thereafter.
In memory of Richard and recognizing his passion to share the love of the Great Outdoors, please consider a donation to the South Carolina DNR, “Take One, Make One” program @ www.hamptonwildlifefund.org/donate.html, Harry Hampton Fund, P.O. Box 2641, Columbia, SC 29202.

To order memorial trees or send flowers to the family in memory of Richard Edward Stefani, please visit our flower store.