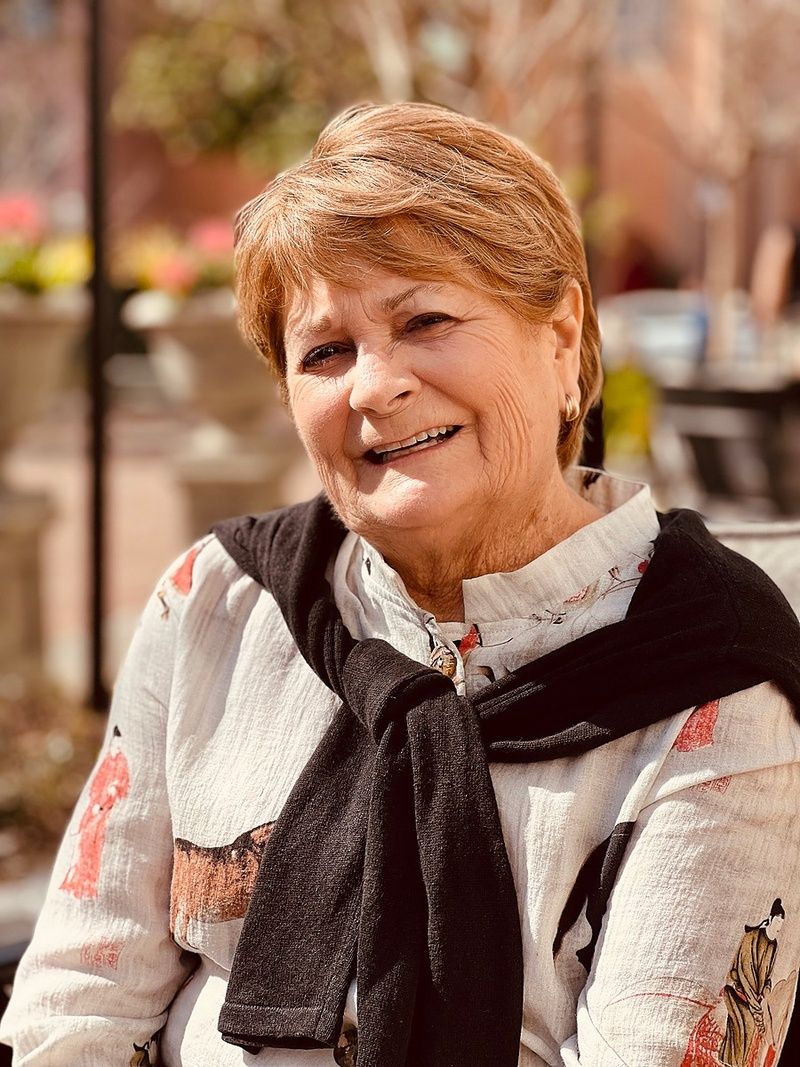 Lucy Ford Findlay of Dover, DE, age 75, passed away suddenly of natural causes on Friday, March 25, 2022. Having just recently celebrated her 75th birthday in Charleston with her children, enjoying her favorite southern comfort foods, good wine, and much laughter, as well as having many visits with dear friends and family in her travels, Lucy left this earthly world feeling well-loved. We know she now celebrates with her husband, Col. George W. Findlay, who preceded her in death in 2016.

Lucy is survived by her daughter, Lisa Findlay Merrill and Grant of West Chester, PA and son Christopher Findlay and Amy of Charleston, SC, as well as four beloved grandchildren: Lucy Merrill (22), Will Merrill (20), Preston Findlay (14) and Logan Findlay (12), for whom she was an amazing "NoMom", and steady source of encouragement, wisdom, and love. If she could be at a school concert, show, meet, game, or tennis match, she was there!

Lucy is also survived by her four Ford brothers: Robert "Rip" (Carol), William "Bill" (Judy), Thom (Diane), and John (Sylvia) as well as brother-in-law Steve Findlay (Grace) and sister-in-law Didi Paty (Bill) along with many nephews, nieces, and their children, who all loved their dear Aunt Lucy. She never forgot a birthday or special day to celebrate. She was also preceded in death by her parents, Bob and Betsy Ford, parents-in law Joy and Donald Findlay, and sister-in-law Debbie Findlay.

Lucy was born on March 1, 1947, daughter of Robert "Bob" Virgil Ford (of Wilkesboro, NC) and Lucy "Betsy" Spach Ford (of Winston-Salem, NC). As the daughter of a pilot who served in the Air Force Reserves and worked for the CAA/FAA as a test pilot, she and her brothers moved around quite a bit. Her many childhood homes included Fort Worth TX, Shreveport LA, Columbus OH, Santa Monica CA, Hagerstown MD, and Atlanta GA. After a year at Salem College in Winston, Salem, NC, Lucy joined her parents, stationed in Hamburg, Germany, and lived there for a year while also attending classes at the University of Hamburg. When she returned to Salem College in 1967, she started dating the love of her life, George, a student at Wake Forest University, and they married in March of 1968. They previously met in 1964, while Lucy was visiting family in Winston-Salem and they became great friends, especially because he could make her laugh! He continued to do so throughout their 48 years of marriage. As a young married couple, they lived in Oklahoma, Florida, and Georgia, and then, in 1974, George's Air Force career brought the family to Dover. It was there that they settled in, made a true home and wonderful life-long friends, and raised their family. They had periods away from Dover stationed at Scott AFB in Illinois (1982-85) and McGuire AFB (1990-94). Upon George's retirement from the Air Force in 1994, the couple moved back to Dover and rejoined their beloved friends there.

Lucy loved flowers and birds and came by that naturally through her mother and grandmother. She had a special gift for decorating and that creative side led to much success in business. Lucy started her own interior design business in 1978 and joined her friend Valla Rogers to form Partners in Design in 1988. Together, they beautified homes and businesses across Delaware for 34 years, receiving the Best of Delaware award, and being named one of the Stars of Delaware in 2021. They were also proud and happy to have a storefront home & gift shop on Loockerman Street from 2008-2015 where their design studio was also located.

A champion for her town of Dover, Lucy was a board member of the Downtown Dover Partnership (DDP) from 2011-2020, working to improve the downtown community. She served as its Vice President from 2017-2020, and was actively involved in the Merchant Committee, Marketing and Promotions, from 2008-2017. With the Merchant Committee, Lucy spearheaded and managed the First Friday Gives Back program (2011-2014; 2019-2020) which benefitted local charity organizations. As a career Air Force Officer's wife, Lucy was also involved officer's wives organizations over the years and then with MOAA, the Military Officers Association of America. Lucy served as the Surviving Spouse Coordinator for the Dover MOAA chapter beginning February 2020. Upon George's death in 2016, Lucy carried on his work with MOAA's scholarship program for Kent County's top JROTC high school senior cadets. Lucy and her family created a scholarship honoring George that she was very passionate about - The Col. George W. Findlay JROTC College Scholarship - gifted annually for the recipient's college education. That scholarship will be continued by the family.

Lucy was a well-loved friend by many and had a great smile and laugh. Once you simply met her, you were friends, and she would help you in any way she could. She loved her family and was extremely dedicated to them. She had passions for travel, gardening, reading, feeding her beloved birds, watching great shows, and staying connected with friends from all parts of her life. A true southerner at heart, Lucy was a beautiful letter-writer, a lover of good southern cooking, and she was fabulous at sharing her life stories. We will all really miss those stories.

A memorial service celebrating Lucy's life will be held Sunday, April 10, at 2pm at Westminster Presbyterian Church, 10 W. Pleasant Grove Rd, West Chester, PA 19382. It will also be livestreamed at https://www.youtube.com/watch?v=E4VASwKxUyA. Visitation with the family will follow the service. A brief burial service will be held at Arlington National Cemetery at a later date.

In honor of Lucy's dedication to downtown Dover through her work with the DDP and beyond, a tribute flower garden will be planted and a personal plaque will be placed at the clock in the heart of downtown on Loockerman & State Streets. For this garden, the family asks that tax-free memorial contributions be made to Dover Main Street Inc. with a memo of Lucy Findlay Tribute Garden. This garden will be planted every year. Checks can be mailed to Downtown Dover Partnership, 101 West Loockerman St, Suite 1A, Dover, DE 19904.
To order memorial trees or send flowers to the family in memory of Lucy Ford Findlay, please visit our flower store.