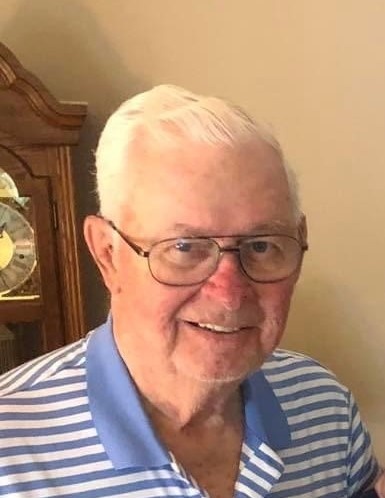 James (Jim) Hubert Burke passed away the morning of Sunday, August 7, 2022 at the Roper/St. Francis Hospice Cottage. He was born on May 13th, 1938, near Pikeville, Kentucky, where he lived until he graduated from High School and joined the Navy. In 1955 he married the Love of his Life, Jeannie Brewer, always referring to it as the “the greatest thing he ever did in his life.”  They had two children, Dwight Burke (Leigh) and Sandra Burke Boyd (Gordon) and two grandchildren, Amanda Boyd Windham (Sean) and Taylor Boyd.  They remained married until her passing in 2000.

His Naval Career moved them several times, but when they arrived in Charleston, they bought a home on the Isle of Palms in 1966 and remained there for the rest of their lives after Jim retired from the Navy.  Hurricane Hugo destroyed the house in 1989.  Determined to rebuild, they decided to live in a camper trailer in the backyard and put all their resources into building their dream home. They made it work and emerged in a year with a new, furnished home and a love of camping.  Jim remained an avid camper for the rest of his life and especially loved camping with his friends in the Lowcountry Good Sams Club.

He was a member of the Isle of Palms Exchange Club for many years, calling Bingo games on Friday nights and working the pancake breakfast event for the Sunrise Presbyterian Church Easter sunrise service. He eventually became a member of Sunrise Presbyterian Church.
After his Naval Career, retiring as an Interior Communications Chief Petty Officer, he worked as an electrician for a private shipyard, then as a production technician at a local television station, an electrician at the old Westvaco paper mill, and finally making his way back to the Navy as a civilian employee at the Charleston Naval Shipyard.  He enjoyed a second career there, starting as an electrician and retiring as the manager of the Audio/Visual department.  In his spare time, he obtained a BS degree from Southern Illinois University and founded his own Audio/Visual company called Calisto Visions, which created marketing videos for local businesses and realty companies. Not long after the second retirement, he got a real estate license and worked as a realtor on the Isle of Palms for several years before moving on to woodworking, which began when he decided to make Adirondack Chairs as housewarming gifts to his real estate clients.

Most of all, he was a beloved father and grandfather, always ready to lend a hand or stop what he was doing for a visit and will be missed by his family and friends.

He is survived by his daughter Sandra Boyd (Gordon) of Blythewood SC; son Dwight Burke (Leigh) of Mt. Pleasant; granddaughters Amanda Windham (Sean) of Columbia SC and Taylor Boyd of Blythewood; sister Lou Sizemore of Mt. Airy North Carolina; many nieces and nephews.  He is preceded in death by his wife Jeanne; mother Maxie; father James; and brothers Lacy, Tracy and Billy.

Visitation with the family will be at J. Henry Stuhr, Inc, Mt. Pleasant Chapel from 6 to 8 pm on Thursday August 11th.  Funeral services will be graveside on FrIday the 12th at 11am at Mt. Pleasant Memorial Gardens Cemetery.  In lieu of flowers, donations may be made to http://emmausroadpartners.org/ .

To order memorial trees or send flowers to the family in memory of James Hubert Burke, please visit our flower store.
Send a Sympathy Card