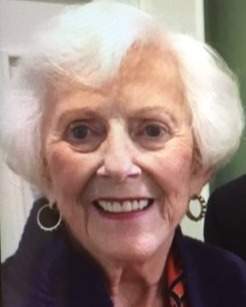 Iris was born February 27, 1940 in Bennettsville, South Carolina, daughter of Peter Clyde Usher and Kathleen Elizabeth  Usher.  Iris taught elementary school in Charleston and Virginia Beach before marrying Phil Kennedy, the love her life. They moved to Germany in 1964 where Phil served in the United States Army. In 1968 they settled in Hartsville, South Carolina where they happily raised three children. She enjoyed playing bridge with her friends, gardening, and spending quality time with her grandchildren. Her most cherished time was spent at the beach surrounded by her entire family.

Iris will be remembered for her infectious smile and unforgettable laugh.

In addition to her husband of 58 years, she is survived by a daughter, Barbara Kennedy Lehnhoff (Richard) of Charleston, SC; sons, William Philip Kennedy, Jr. of Switzerland and Peter Usher Kennedy (Haven) of Asheville, NC; and grandchildren, Lizzie and Caitlin Lehnhoff, Philip and Lily Kennedy, and Ava Mae and Clara Kennedy. The family is grateful to those that are traveling great distances in support of them, especially Kelly Kennedy, who is traveling from the west coast.

To order memorial trees or send flowers to the family in memory of Iris Usher Kennedy, please visit our flower store.

The family will also receive friends immediately following the service.