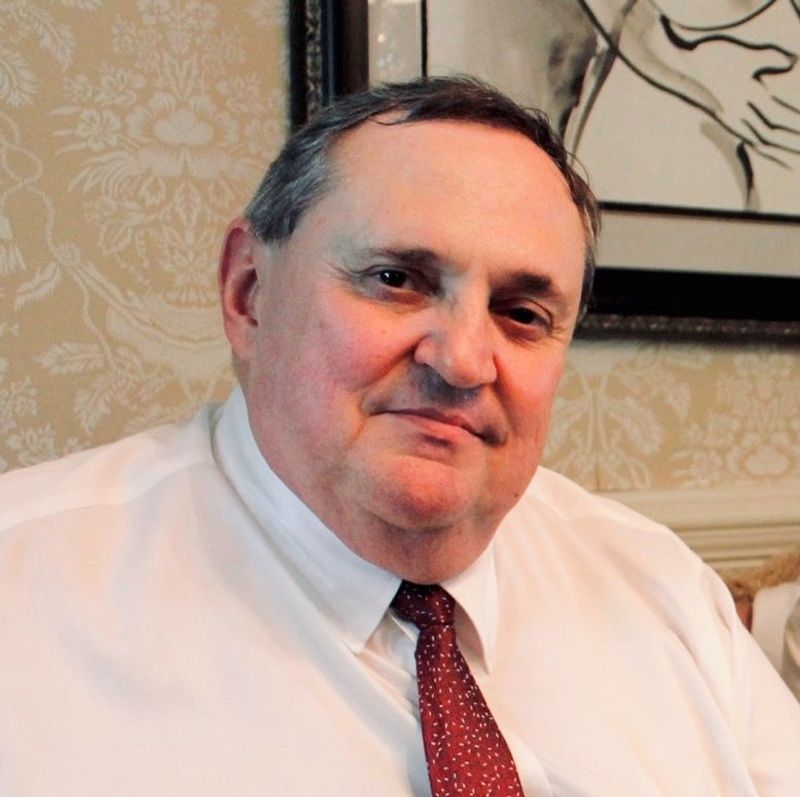 Harold Anthony "Mick" Mackey had the gift of a generous heart that he opened fully to those around him. That big heart gave out and beat its last on the evening of June 10, 2021 in Charleston, South Carolina. Our world has lost some of its luster without him in it.

Maya Angelou said, "People will forget what you said, people will forget what you do, but people will never forget how you made them feel." Harold made people feel good. He was a presence. He was fun. He had a quick wit and an observant eye. When he showed up on Thanksgiving we knew he'd expertly carve the turkey and swap a few entertaining lies before calling us to the feast. At Christmas, he donned a red vest and distributed a sack of presents selected with care; when Harold arrived, everyone knew that the party'd finally begun.

When Harold stepped into a room he lifted clouds of doubt and gloom. His nieces and nephews knew that no matter what kind of complicated stuff was going on in their world, Uncle Mick always made them feel better about finding a good path forward.

His colleagues at the Medical University of South Carolina (MUSC) knew that Harold dug The Simpsons, Dilbert, Pogo, The Far Side, and wry New Yorker cartoons. He could be counted on to bring that slightly off-kilter sensibility to any meeting or project, to elevate the mood and sharpen the focus no matter the difficulty of the topic.

Harold lived a block from the Atlantic on the Isle of Palms. He loved to walk the beach, cast a line in the surf, and let the peace that comes from the rhythm of the tides nourish his spirit. He spent the final four-plus decades of his life deeply dedicated to his family. He made a lifetime commitment of partnership and love when he married his wife, Nancy Burnett Mackey, in 1982. In 1993 they were graced by the birth of their son, Alexander Dylan "Alex" Mackey. Nancy and Alex survive him in Isle of Palms and Charleston, respectively, as does a sister, Susan Mackey Hogue, and a brother, Richard J. Mackey, both of Columbia. He is also survived by numerous nieces and nephews that he loved to hang out with, and a host of in-laws and outlaws. He was predeceased by his parents, Harold Merritt Mackey and Leslie Frances Lausi Mackey, and a sister, Judith Ann Francis. Harold also leaves Romeo, his much loved Maine Coon Cat. When he twirled his fingers Romeo would perform a few rollovers to earn himself a special kitty back-rub while listening attentively to Harold's musings.

Harold will be remembered by friends and loved ones with deep affection and joy at a party and celebration of life at The Dock, Bowens Island Restaurant, off Folly Road (Highway 171) on June 28, 2021, 6:00pm to 9:00pm. All are welcome to enjoy food, drink, music, swapping stories and a nice sunset in a casual and relaxed atmosphere.

A funeral mass for Harold will be celebrated at Stella Maris Roman Catholic Church on Sullivan's Island, SC, on June 29, 2021 at 11:00am. All are welcome.
The family requests that in lieu of flowers, memorials in Harold's honor may be made to the Hollings Cancer Center at MUSC, the American Heart Association, or a charity of your choice that fights heart disease or cancer. The family is being assisted by J. Henry Stuhr, Inc. Mount Pleasant Chapel.

Harold was born in Gloucester, Massachusetts, May 15, 1952. He was an Army brat whose world view was shaped by living on or near military bases in the United States, Germany, and Italy at the height of tense Cold War hostilities. Harold graduated from A.C. Flora High School in Columbia in 1970, and the University of South Carolina later that decade. At USC, he began as an engineer and finished as a political scientist and philosopher. Some might call that a meandering path. If he were here, he might tip his hat to one of his favorite authors, J.R.R. Tolkien, and say, "Not all who wander are lost."

In fact, Harold's strong intellect and unquestioned work ethic led him to success in every role that was important to him. A distinguished professor of philosophy and religious studies said that Harold wrote the best senior thesis on existentialism that he's ever seen. After graduation he became a go-to video editor at SCETV in Columbia during the golden era of locally produced original programming.

He helped run a family business in Charleston before joining the effort to create a digital revolution at MUSC. Harold started in the Digestive Disease Center and was instrumental in the development of their award-winning website and online medical education program. Later, he became a member of the Information Solutions department where he played a key role in introducing and supporting advanced technologies used by the endoscopy, ENT, and bronchoscopy programs. Perhaps his most lasting contribution was providing technical mentorship, friendship, an encouraging word, and a helping hand to all that knew him.
But family was paramount. Alex, Nancy, and Harold were a mutual support society through times of joy and times of sorrow. They loved to travel to Disney World, the Big Apple, and New England in search of family roots. If there were a Hall of Fame for fathers and sons who love each other without reservation, Harold and Alex would be in the first rank. Their swing together through the Western U.S. and Canada is the stuff of family lore. There was never a doubt about the depth of their bond. It will endure forever.

Harold, our Mick, we are heartbroken that you've gone down the Seven Bridges Road. But we know there are stars in the Southern sky, southward as you go. There is moonlight and moss in the trees. Let our love cradle your gentle heart, and our smiles light your path. Godspeed. May your spirit find comfort and grace in the eternal, now and forever.
To order memorial trees or send flowers to the family in memory of Harold Anthony "Mick" Mackey, please visit our flower store.