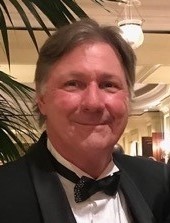 George Attila Gulyas passed away peacefully on June 9, 2022, at his home in Charleston, SC.
George's life was characterized by a fighting spirit, a kind heart and a strong love for his country, his family, and friends from every chapter of his life. Always a gentleman of the highest integrity, George was lots of fun to be around and will be remembered for his sense of humor and infectious laugh.

Born in South Bend, Indiana in 1955, George grew up as the middle of five children. George's formative years were spent in San Carlos, California. He attended Junipero Serra High School, serving as Student Body President and a member of the Padre football team. After graduating in 1973, George followed his older brother Ed to the University of Notre Dame, where he participated in football and rugby, graduating with a BA in Communications in 1977.

After college, George moved to Washington, DC, where he lived for more than 30 years and pursued his dream career in the executive security industry. During his time in DC, George was a Special Assistant for Security for Dr. Henry Kissinger, a Special Agent assigned to the protection detail of Alan Greenspan and, in more recent years, a proud partner and Senior Vice President with Secure Source International, LLC.
George never let his lifelong affliction with Type 1 Diabetes limit him and he remained active throughout his life. In DC, he was a member of the Washington Rugby Football Club, playing in Wales and England in 1977.

He pursued his passion for football, serving eight years as an Assistant Coach with the Georgetown University football team, working with running backs and wide receivers. An avid golf enthusiast, George and his brother Ed were a legendary duo at the annual Mount Vernon Country Club member-guest golf tournaments, winning the tournament several times.

After losing his wife Kitty in 2013, George moved to the Lowcountry with his son, Barrett, to be near family and enjoy the coastal environment of Charleston. George enjoyed his new surroundings and found love again, marrying Lydia Evans in 2021. George and Lydia brought great joy to each other in the few years they had together. She stood by his side through his health challenges and always made sure that he had time with his dear friends who meant so much to him. Lydia was a blessing to George during a very challenging time.

May George rest now in the peace of God's loving care. There will be a Celebration of George's Life on Saturday, August 6, 2022, at 11 a.m. at St. Philip's Church, 142 Church Street, in Charleston, South Carolina, followed by a reception in the Parish Hall. Arrangements by J. Henry Stuhr, Inc, Mt. Pleasant Chapel.

In lieu of flowers, memorials may be made to the Juvenile Diabetes Research Foundation (https://www.jdrf.org).

To order memorial trees or send flowers to the family in memory of George Attila Gulyas, please visit our flower store.
Send a Sympathy Card