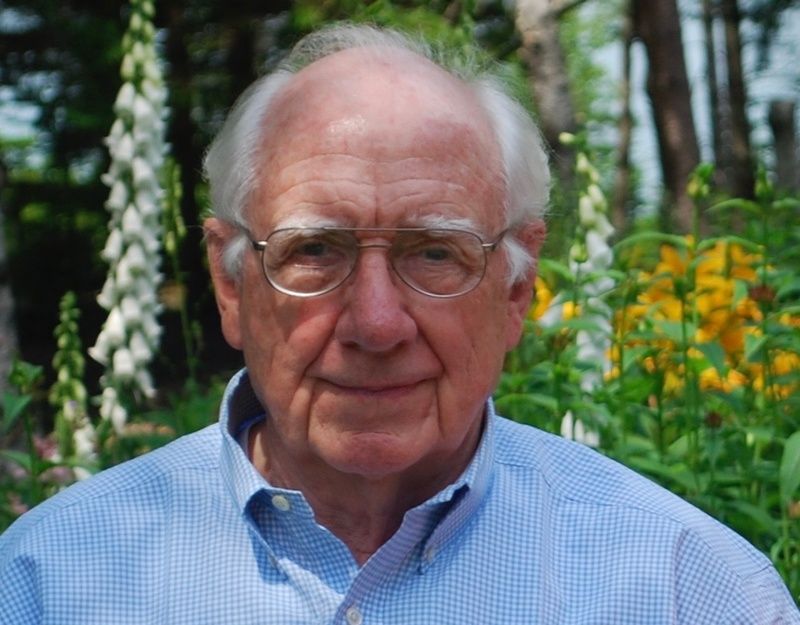 Geoffrey is survived by his children Andrew Place (Stacey), Nicholas Place (Pamela), and Susan Place Everhart (David), and son-in-law Steven Wilcher; his brothers Gordon Place (Dilys) and Collin Place (Margaret); his 7 grandchildren Heather Crucilla (Antony), Alexander Place (Christy), Naomi Everhart, Sara Everhart, Emma Place, Katherine Wilcher, and Aidan Place; and his 4 great-grandchildren Sienna, Wesley, Cooper, and Felicity. He was predeceased by his beloved wife Janice and daughter Fiona.Geoffrey was born on March 11th, 1931 in Lancashire, England, to Harry and Edith Place. The son of teachers, he was a talented and hard-working student, and recognized early as a boy of character with strong leadership capabilities. He earned the King's Scout award, which he received from King George VI in London. In 1948 Geoff was selected as a member of the UK delegation to participate in the Global Scout Jamboree for Peace in France, an opportunity for young men to come together in friendship and peace as the world emerged from war.

Geoff served two years of national service in the British Army (East Lancashire Regiment) and continued in the Army Emergency Reserves, rising to the rank of Major in the Royal Corps of Signals. He was awarded the Emergency Reserve Decoration in 1965.

Geoff joined the Procter and Gamble Company in England in 1954 and dedicated his entire professional career to research and development at the firm, first in England, then at the European Headquarters in Brussels, before moving to the US in 1968 to the firm's global headquarters in Cincinnati, Ohio, where he served as Vice President for Research and Development globally from 1977 up to his retirement in 1992. During his career, Geoff was deeply focused on continuous innovation in RandD, played a pivotal leadership role in the globalization of PandG's markets around the world, and traveled widely. He was a committed mentor to younger leaders in the firm, both men and women.

During these professional years, Geoff contributed his talents to a number of national-level efforts, including many years in support of the Industrial Research Institute (including a term as President); active participation in the National Research Council; joined presidential initiatives on industrial innovation under both Presidents Carter and Reagan; and supported several universities' research agendas. After his retirement from PandG, Geoffrey served 6 years on the Board of Environmental Studies and Toxicology at the National Research Council (National Academy of Sciences).

Geoff had an extraordinarily strong commitment to community service. He was deeply inspired by his long-standing affiliation with Cincinnati Children's Hospital Medical Center, serving on their Board of Trustees for 30 years, from 1979 to 2009. His distinguished service to this teaching hospital included serving as Chair of the Research Committee of the Board and contributing strategically and creatively to the growth of the institution's research program. He saw the hospital rise in prominence to become one of the country's leading children's hospitals. Upon his retirement, in honor of his many contributions, Cincinnati Children's Hospital Medical Center established the Place Outcomes Research Award program.

Above all, Geoff will be remembered for his love and dedication to family. A caring and committed husband and father, his devotion to his wife Jan throughout their marriage, and in particular during her last years of decline, was a true inspiration and example to us all on the meaning of love and partnership. Of all the things that he cared about and took pride in, family was without parallel.Geoff met his beloved wife M. Janice Entwistle in England, where they married on August 9th, 1955.

In retirement, Jan and Geoff lived in coastal South Carolina and spent summers at their treasured home on Deer Isle, Maine, moving to the Bishop Gadsden Episcopal Retirement Community in Charleston in 2006.In his personal life Geoff had many interests. An avid sailor and skilled navigator, he equally enjoyed competitive racing at Cowan Lake in Ohio and long sailing journeys with friends throughout the Caribbean, Europe, and coastal Maine.

A skilled craftsman, Geoff built any number of wooden boats in his workshop in Maine, which engendered a love of boats, the water and exploration in his grandchildren and great-grandchildren.He was a lifelong member of the Anglican/Episcopal Church, singing in choir from his boyhood through to his last years. His resonant bass voice was enjoyed by many.

Geoff will be remembered for his commitment and belief in making the world a better place, for setting the example that character is what truly matters, and for believing in fairness and equality in all places - in the home, in the workplace, and in society. He will continue to be a shining example for all our lives.

A funeral service will be held on Wednesday, August 25, 2021 at 2:00 p.m. at the Chapel at Bishop Gadsden on James Island, SC. Arrangements by J. Henry Stuhr, Inc. Downtown Chapel.

In lieu of flowers, memorial donations may be made to the Bishop Gadsden Charitable Fund at One Bishop Gadsden Way, Charleston, SC 29412.
To order memorial trees or send flowers to the family in memory of Geoffrey Place, please visit our flower store.