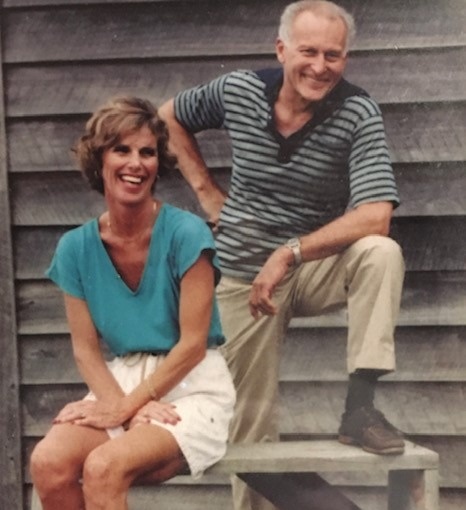 Frank H. Gruber, Jr. was born in Morristown, New Jersey on August 18, 1925 to Frank H. Gruber and Viola von Schnarendorf and raised in Pleasantville, New York. His trajectory as a rather unfocused high school student was altered dramatically by World War II, when he scored exceedingly high on the Army Air Corps aptitude test and was placed in their pilot training program. He enjoyed the challenge of flying and the company of his fellow cadets, most of whom were older with college degrees. As with so many of what became known as "the greatest generation", the war had placed Frank on a different track. He not only wanted to go to college, but to excel.

When the war ended, Frank found himself in Atlanta, Georgia where he immediately applied to Emory University. He was told that they had to take him under the G.I. bill, but given his high school record, he would not last a semester. He finished Emory with all “A's” except for a “B” in a religion class. He went on to attend Emory Medical School where he was inducted into the Phi Beta Kappa club. After completing his radiology residency training at the University of Rochester, Frank moved to Charleston in 1958 to join the staff at Roper Hospital where he was only the second radiologist. He remained at Roper Hospital his entire career, serving many years as department head and Chief of Staff and retiring in 1995.

Frank married the love of his life, Cecilia Pruitt on December 31, 1962, a date he selected at the last minute for tax purposes, as he told her. They moved to the country and his life really began with her at his side. Together, they raised three children and thoroughly enjoyed each other until Cecilia's death in 2020.

Frank enjoyed a well deserved professional reputation in his chosen field of medicine, but he was more widely known for his array of eclectic interests and Pursuits. He raised horses at his home in Ravenel S.C., piloted his v-tail Bonanza to the Caribbean with his family, and designed and built beautiful wood furniture using his favorite walnut, oak, zebrawood, cocoboa mahogany wengue, and ebony. He was known for his brilliant mind, but also for his razor sharp wit, and practical jokes that were exchanged with colleagues, some ongoing for decades. Frank was not a socialite, but enjoyed interacting with those who piqued his interests, offering well thought out, though often unsolicited, advice ranging from business and academic endeavors to romantic matchmaking. For some of those individuals, Frank's impact on their lives was profound.

Frank did not waste time or engage in what he would have considered frivolous pursuits. Until old age, he walked fast with purpose, and every vacation had a "mission". A trip to Europe was to find German Shepherds and study the intrinsic art of German woodpiles. There was no beach lounging on family trips to Eleuthera. Grandchildren were to report over dinner about what types of reef fish they had discovered in the Bahamian Sea, preferably in the early morning. In the late 70's and 80's private planes returning from the Bahamas were searched for cocaine, but not Frank's v-tail Bonanza...his was smuggling in self-caught reef fish for his aquarium. He panned for gold in Wyoming in his 70's, cruised the Amazon and the Galápagos Islands with Cecilia in his 80's and fly-fished in Southern Patagonia in his 90's. He never stopped learning and acquiring knowledge, and he never lost his interest in others. Frank had the unique ability and desire to create new adventures as he aged. This kept him engaged and relevant across multiple generations until the end of his life.

Frank and Cecilia were married for 57 years, and raised three children, who have survived him, Elizabeth Courtney, Karl Kulle (Georgia) and Robert Pruitt (Laura). He is also survived by his six grandchildren, Elise, Laura, Luca, Cecilia, Axel and Ingrid, numerous nieces and nephews, and his sister in law, Lydia Pruitt Davidson. He was predeceased by his wife, Cecilia and his brother, Karl.

Our family is eternally grateful for our angels of devoted home healthcare and friendship to both Cecilia and Frank, Donna Jean Harris and Scott Rowe.

Frank's beloved German Shepherd "Cak" followed him on his daily rides on his Kubota until his death on June 28, 2022.

In lieu of flowers, donations can be made to Veterans on Deck - Charleston chapter or Keeper of the Wild Wildlife Rescue and Sanctuary.  Internment with family will take place at a later date.

To order memorial trees or send flowers to the family in memory of Frank H. Gruber, Jr., please visit our flower store.
Send a Sympathy Card